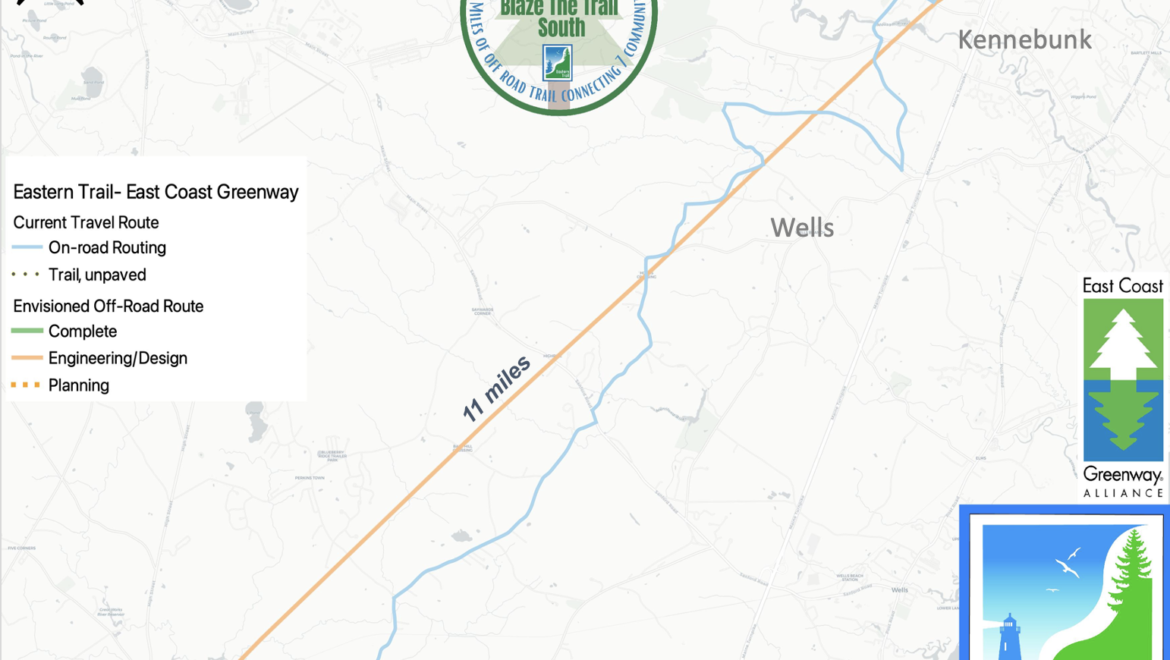 Posted in the West End News by Nancy Dorrans on June 6, 2022

On May 20th, a small group of Maine outdoor enthusiasts, cyclists, journalists, local and state officials, gathered at Kennebunk Elementary School to celebrate the Eastern Trail. The trail received $700,000 in new federal funding to expand south from Kennebunk to North Berwick.

Jon Kachmar, Executive Director of the Eastern Trail, announced how thrilled he was to see this dream come true. “The final engineering design has been on the Eastern Trail radar for several years and we’re excited. It’s finally happening. When the new trail is constructed, it will represent the longest section of the Eastern Trail built to date, creating eleven miles of new trail (from Kennebunk to North Berwick) for walkers, bikers, runners, wheelchair users, and other non-motorized modes of transportation, both for people nearby as well as from away.”

Kachmar is responsible for managing and supporting the Eastern Trail Alliance and its maintenance and construction. He notes they are not done yet. “…When we hit North Berwick, we’re working collaboratively with communities to the south to continue our push to the New Hampshire border. This next project plans to connect the Eastern Trail to South Berwick, Elliot, Kittery, and finally reach the New Hampshire border. Maybe we’ll call this the Berwick to the Border campaign! With the rest of New England, we’re excited, albeit a bit nervous about such big ambitions.”

“Because we believe in it.”

Chellie Pingree smiled as she spoke passionately about the funding and how it came to the Eastern Trail in Maine. “This wouldn’t have happened without the supportive (local) communities… I couldn’t be more excited to think about this trail coming all this way … and not having any more breaks in it where you have to go off and ride on the road. And especially during our busy summers. I’m a bicyclist myself and I love nothing more than riding on a bike trail and to keep riding for a very long time.”