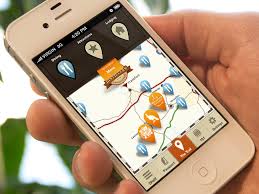 We are hoping to better develop an array of map resources of the Eastern Trail that will work with GPS devices, mobile phones and and other mobile devices.

Available in desktop and mobile App for Iphone or Android.

“We make it easy to map, analyze, record, and share your bike rides.”  Many routes on and around the Eastern Trail created and uploaded by riders. Examples include:

Available in desktop and mobile App for Iphone or Android.

AllTrails is an outdoors app for Desktop, iPhone and Android that shows you which way to go, and records your time, speed and elevation. Download the App here.

Alltrails has maps for many sections of the Eastern Trail, including the South Portland Greenbelt and the ET in Scarborough, but also many other trail segments that are near to or even connect with the Eastern Trail.

Until recently, Google Maps would link to a map of the Eastern Trail found on our web site. Now, there is a different process:

1) Open Google Maps, sign in, and open My Maps.

2) Click on “Create Map”, then clink on “Import”, and upload the KML file found at http://www.easterntrail.org/etmaps/etmd.kml

3) Name the file “Eastern Trail”, and then view the map on your desktop or mobile device.

1) To load the Eastern Trail POIs into the “Maps App” on the iPhone, simply enter the map address “http://www.easterntrail.org/etmaps/etmd.kml” into the “Map Search Bar.”

2) Once the address is entered, the App will load all of the ET POI pins onto the Map.

Current File Downloads for Garmin and other GPS devices:

NOTE: The compressed file (jan-22-2012-gpx.zip) must be first downloaded to your desktop computer and then opened using a program like WinZip®

Do you know any other mobile map resources that can help Eastern Trail users? If you do, please submit them to us! Thanks, and enjoy the Eastern Trail!