The Economic Impact of the Eastern Trail

Since the Eastern Trail’s inception in the late 1990’s, much anecdotal evidence has been collected and exchanged regarding how the trail benefits both individuals and communities in southern Maine. This evidence appeared to make a sound argument for substantial economic benefits to towns and businesses bordering the Eastern Trail. However, without a statistically-based, methodical examination of those benefits, there was no way to determine the real economic impact of the developing trail.  There have been several efforts to collect, present and disseminate economic impact data related to current and developing sections of the Eastern Trail. 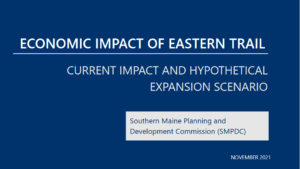 The Current Economic Impact Study for the Eastern Trail

The most recent economic analysis of the Eastern Trail was completed by Camoin Associates and in partnership with Southern Maine Planning and Development Commission (SMPDC). It highlights a total annual economic impact of $44.6M associated with Eastern Trail use between its northern terminus in South Portland and the state border in Kittery. The report’s analysis considers both the (1) impact of current trail usage; and (2) impacts of a hypothetical trail expansion scenario that results in new construction spending and trail usage.

It is estimated roughly 250,000 people use the trail annually based on recent trail counts, and each user spends an average of $118 per day. The trail also supports 364 jobs across the state, $12.5M in earnings and $32.1M in sales, with most sales coming from overnight lodging, food and drink, and retail items.

The Eastern Trail is currently working to complete new trail sections in Scarborough, Biddeford/Saco, and between Kennebunk and North Berwick totaling 16 miles. The economic analysis also considers the impacts that will result from new trail sections when they are built. The analysis highlights an anticipated total statewide increase of 32 jobs, $1.6 million in earnings, $4.3 million in sales and $136,000 in tax revenue associated with building 16 additional miles of Eastern Trail. Paul Schumacher, SMPDC Executive Director, states “work is underway to better understand the larger outdoor industry’s economic impact in Southern Maine, and the Eastern Trail is an important component of our regional outdoor recreation sector.”

A copy of the 18 page report can be viewed here (pdf format).

A Summary Infographic of major findings of the report can be viewed here (pdf format).

Over $44 million is associated with use of the Eastern Trail each year, Portland Press Herald article, Dec. 31, 2021.

In 2014, the Eastern Trail Alliance conducted a study and published its first Economic Impact Study, based on a survey methodology developed and tested by the Pennsylvania Rails-to-Trails Conservancy specifically to monitor and measure the economic impact of rail-trails. That first study, however, relied on a limited measurement of trail traffic taken over a four-month period and then extrapolated according to accepted statistical models to an estimated count of 88,000 annual users on off-road sections whose presence contributed nearly $900,000 to the economies of local communities.

Those figures provided impressive testimony that the ET brought people and dollars to southern Maine, particularly to towns served by its off-road sections.  But that initial study begged for more longer, more determined measurement of ET traffic and more in-depth analysis of both primary— and less apparent secondary— economic impacts.

The 2018 Update to the ET Economic Impact Study 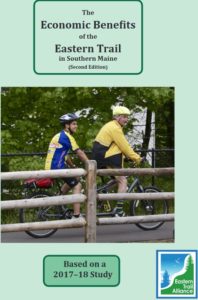 The updated 2018 study was different in several respects:

For the original 2014 study, infrared traffic counters were installed in four strategic locations along off-road sections of the Eastern Trail. 2014. [See maps on facing page.] For the 2018 Update two more counters were added on the 5.7 mile Greenbelt section in South Portland. The original four units counted traffic from July 1, 2017 to June 30, 2018. The two Greenbelt counters measured traffic from mid-November 2017 through August 31, 2018, enough time to permit extrapolating the missing 2.5 months. The total reached, while impressive and compelling, is, according to all statistical guide–lines we consulted, still a conservative number.

Key findings from the report include: