History of the Eastern Trail, from railroad era to present trail use and extension 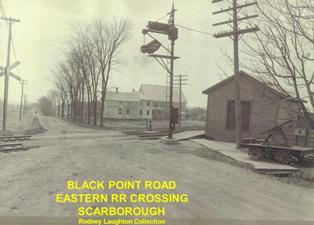 The Portland, Saco and Portsmouth RR Line was the first railway from southern Maine to Boston. Starting operations in 1842, its tracks ran from a station on Commercial Street in Portland, across the Fore River to South Portland, then south to Scarborough, Saco and finally to North Berwick, where it connected to the Boston and Maine railway.

In 1872, the Eastern Railroad bought out the Portland, Saco and Portsmouth RR Line.

The Portland Electric Railroad Company connected a trolley line with the Eastern RR to give tourists arriving in Portland direct access to the “Grand Beach at Old Orchard. See story on this by Jim Bucar in the Spring 2012 ETA newsletter, page 4. 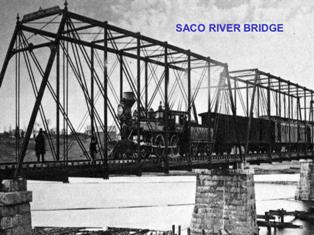 n 1945, after over a century of service, the Boston & Maine Eastern Line suspended train service from Kittery to Portland. In 1965 Portland Gas Light purchased much of the abandoned right-of-way and installed a natural gas pipeline, a use that continues today. Unitil, a New Hampshire-based public utilities company, acquired the line and most of the right-of-way in 2008.

In 1991, the dream of a recreation-transportation trail offering public access— particularly to hikers and bikers—coalesced into the formation of the East Coast Greenway Alliance (ECGA). The ECGA, dedicated to the development of a continuous, traffic-free trail from Florida to Maine, links 25 major eastern seaboard cities and offers its users a multitude of historic and scenic experiences.

Maine, however, had already given expression to this vision. In 1973, the Planning-Research Division of the Maine Bureau of Parks and Recreation published a study of B&M’s abandoned rail right-of-way and its potential use as a trail from South Berwick to Scarborough – ending before the marsh at Pine Point Rd. That study found most of the right-of-way in “good” condition.

The Eastern Trail is Born

In December 1997, a few local outdoor conservation enthusiasts active in developing hiking trails in Scarborough, Saco and Old Orchard Beach, united in their desire to create a trail on the abandoned rail corridor between Scarborough Marsh and Route 1 in Saco. They had no expertise, no money, no organization— only enthusiasm, energy, and a “why not?” attitude. Therefore, undeterred by unknown obstacles, they inquired of Granite State Gas Transmission [then right-of-way owner] about access to the right-of-way and were rewarded by a favorable response from GSGT’s president: “As a pipeline operator, Granite has minimal above ground facilities and would not object to use of its right of way for passive recreation.”

In January 1998, these volunteers showed up, unannounced, at a USM public Bicycle Coalition of Maine (BCM) meeting to pitch their trail idea. Quite unexpectedly, not only the Coalition but also other participants— representatives from the Maine Department of Transportation (MaineDOT) and the Maine Office of the National Park Service Rivers, Trails, and Conservation Assistance Office (NPS-RTCA) — immediately endorsed their proposal.

Thus, the Eastern Trail group decided to organize to take advantage of the groundswell. In March 1998, the group now called the Eastern Trail Alliance (ETA) held its first public meeting, still focused on their modest proposal for a Scarborough-Saco trail. But interest and letters of endorsement from Arundel and South Portland, which was hoping to develop a trail from Bug Light to Scarborough, widened their ambitions. Further, a 1998 full page story published in the Maine Sunday Telegram provoked wider attention and interest from other communities, who sent representatives to ETA meetings. By 1999, all the activity and publicity attracted the attention of the ECGA, who decided to hold its Second Annual Members Meeting that September in . . . South Portland! The ECGA recognized that what was happening spontaneously in Southern Maine was precisely the kind of local/regional activity that could make their national dream a reality.

First, the founders of the ETA had to find how to translate their contagious regional enthusiasm into the pragmatic strategies that would turn dreams into grounded reality. Valuable advice came from the MaineDOT: ETA could not hope for financial or project support from state or federal sources until it incorporated with representatives from the towns the trail would cross if it followed the path recommended in the 1973 study. With the advice and participation of MaineDOT, the Southern Maine Regional Planning Commission, and the NPS-RTCA, ETA was able to define and codify an organization with a governing board of representatives from each municipal government and the ETA. The official result was the Eastern Trail Management District (ETMD).

Several projects and milestones have followed: 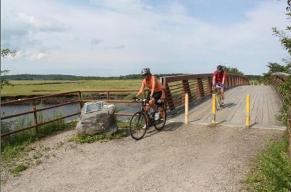 2012
The John R. Andrews bridge in Saco over route 1 is opened and dedicated to the founder of the Eastern Trail. Story.

The 9th annual Maine Lighthouse Ride is the largest ever, with over 900 riders

2014
An economic impact study and survey conducted along portions of the off-road ET during the summer of 2014 was published providing insight into the economic benefit of the trail to our host communities.

2015
An economic impact study and survey conducted along portions of the off-road ET during the summer of 2014 was published providing insight into the economic benefit of the trail to our host communities.

The 12th annual Maine Lighthouse Ride sells out again, with 1200 registered riders! New additions to the ride included Portland Pie pizza, Friendly’s Ice Cream, and Shipyard beer much appreciated by the many riders.

2016
The Close the Gap campaign begins to raise funds to close a 1.6-mile “gap” that interrupts off-road travel between South Portland and Saco. The construction of this critical trail segment, which includes two bridges will close this gap and provide 16 continuous off-road miles reaching from South Portland’s Bug Light to Downtown Saco. The cost to close this gap is $3.8 million dollars.

The first water fountain and water bottle fill-up station is installed on the trail in Saco just off Mill Brook Road.

2017
The founder of the Eastern Trail, John Andrews, passes away in February. Read about his legacy here.

The Eastern Trail Alliance reaches its $4.1 million fundraising goal for the “Close the Gap” campaign to build two bridges in Scarborough that will complete 16 miles of uninterrupted, off-road trail from downtown Saco to Bug Light Park in South Portland. The largest fundraiser in the alliance’s 18-year history was topped off with an additional $500,000 pledge made at the end of the year from the Maine Department of Transportation.

2018
The Eastern Trail Alliance announces its new Blazing the Trail South campaign. When complete, Blazing the Trail South will add 19 miles and extend a current 6.2 mile off road section of the ET providing over 25 miles of off road trail connecting 7 communities in the most densely populated region in the state (Greater Portland, Cumberland and York Counties) providing a safe and convenient facility for bicycle commuters, recreational riders, walkers, and wheelchair users, for transportation, health and enjoyment. Read more about this campaign here.

The first Annual “Taste of the Town” Gala was held at Camp Ketcha in Scarborough. It was a huge success – over 200 people attended and over $12,000 was raised to benefit the Eastern Trail’s “Close the Gap” campaign. Plans are in place to hold this event each spring to raise funds for our trail design and building campaigns.

The Eastern Trail Economic Impact Study is republished with new data collected from surveys taken on the off-road sections of the Eastern Trail between 2017 and 2018. The total count of trail users: 251,978. Significant benefits from the trail include spending by trail users on local businesses, physical and mental health benefits, and eco-tourism by many from away visiting the trail and spending money locally. Read the whole report here.

2019
The “Over The River” trail development campaign is announced. The Cities of Saco and Biddeford are actively seeking alternatives to the current on road route between their two off road trail segments. The preferred route to take the trail Over the River would be to utilize the existing rail corridor and bridge over the Saco – currently owned and operated by Pan Am.

The “Through the Woods” trail development campaign is announced targeting an 18-mile section from Kennebunk through South Berwick. Unitil, the corridor owner, has provided us with a letter of intent for an easement which would grant access for the trail to be located within their right of way. Several local businesses and organizations have sent in letters of support. Many thanks to our two large donors, The Craig Family Trust and the Caiazzo family! Their collective $100,000 contribution helped us launch a fundraising campaign similar to the successful one for Close the Gap. To date, through their support plus donations from Pratt & Whitney, five foundations, the towns of Wells & Kennebunk, Maine DOT and several individual donors, we have raised over $250,000 towards the design and survey for the 10 miles from Kennebunk through Wells and past Pratt & Whitney in North Berwick.

2020
Changes are made to allow continued use and enjoyment of the trail in the midst of the COVID-19 pandemic. Social distancing while getting outside is encouraged, and group running and biking events such as the Maine Lighthouse ride being held virtually.

2021
Feasibility Studies for key new development sections of the trail make significant progress. Public meetings are held related to feasibility studies in both the “Over the Trail” Biddeford-Saco section, and the “Blazing the Trail South” section in North Berwick, Wells, and Kennebunk.

Progress continues to be made in the Close the Gap campaign, solving problems related to easements and needed infrastructure.

Two more public meetings are held in February and March related to feasibility studies in both the “Over the Trail” Biddeford-Saco section, and the “Blazing the Trail South” section in North Berwick, Wells, and Kennebunk.

More miles to design and build, but we are making great progress! The Eastern Trail Alliance will continue to support the miles of the Eastern Trail greenway sections that are already completed.

Some sources for additional reading: