Eastern Trail is Rail-Trail Conservancy’s Trail of the Month: March 2022 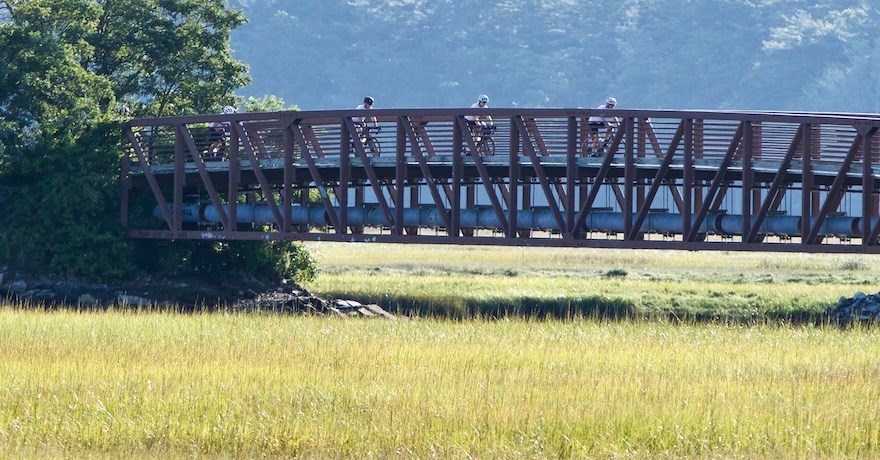 “In a lot of ways, the Eastern Trail is a model of what could happen in the state.” —Jeremy Cluchey, volunteer member of the Maine Trails Coalition

A couple times a week, Bob Hamblen takes to the Eastern Trail on his bike, riding through various sections of the route that traverses 28 miles of southern Maine’s spectacular coastline. While he sees it as “a win” wherever he ends up on the trail, the long-time Saco resident has his favorites.

Hamblen, a trustee on the Eastern Trail Alliance board, is especially fond of the South Portland portion, also known as the Greenbelt, that passes through neighborhoods and ends at Bug Light Park on Casco Bay, as well as the southern section from Biddeford to Kennebunk.

He isn’t the only one who can easily pinpoint favorite trail features. Eastern Trail Alliance Executive Director Jon Kachmar loves the stretch he calls “the gorge” near the town of Arundel. It is the area where the old Eastern Railroad blasted through rock more than century ago to make way for the train track. “It’s quiet, and it’s unique,” he said of the rocky ravine.

Allison Kenty, director of communications and public affairs for the Southern Maine Health Care Hospital in Biddeford, is partial to the wooded trail section that goes right by the hospital campus. In fact, she sometimes uses it to get out of her office and into the fresh air while she takes a conference call.

And for Jeremy Cluchey, a volunteer member of the Maine Trails Coalition, the best part of the Eastern Trail is the Scarborough Marsh, the 3,200-acre saltwater marsh where he has often taken part in the Maine Audubon’s annual Snowy Egret 5K run. “Every time I’ve done it, it’s been this glorious May day,” he said.

When it comes to a trail as varied as the Eastern Trail, it should come as no surprise that everyone seems to gravitate to different features. Kachmar says the diversity of the Eastern Trail is one of its strong suits—the thing that makes the trail such a treasure.

Along with Bug Light—the area’s famous lighthouse, dubbed so for its small size—Scarborough Marsh and the charming South Portland neighborhoods, the Eastern Trail also passes by areas of dense forest and one particularly lovely 7-mile stretch of sandy beachfront at Old Orchard Beach.

There is no question that the Eastern Trail is beloved in the communities it passes through, including South Portland, Scarborough, Saco, Old Orchard Beach, Biddeford, Arundel and Kennebunk.

“It has become a goal for multiple communities to see [the Eastern Trail] built within their borders,” Hamblen said. “It exists in seven towns now, with five to go. Towns that would ordinarily have little reason to communicate now have a common goal: to finish the Eastern Trail.”

The trail’s place in the community is a product of about three decades of work. The dream of the trail formed in the early 1990s, and the Eastern has been expanding gradually through the years.

The original route was built by the old Eastern Railroad, whose tracks traveled from Boston to Portland. The train started in the 1840s and ran through the 1940s when service was suspended. After sitting idle for 20 years or so, the rail corridor was tapped in the 1960s as a route for a natural gas line. It’s a use that continues today, and Kachmar said the Eastern Trail works with Granite State Gas, receiving significant in-kind benefits from the utility and the ability to use easements for the trail.

The Eastern Trail’s track record in the community serves as an example for other aspiring trail groups in Maine, according to Cluchey. “In a lot of ways, the Eastern Trail is a model of what could happen in the state,” he said. “They have done really important work. We leverage that.”

Tom Sexton, the northeast regional director for Rails-to-Trails Conservancy, sees the Eastern Trail as a pioneer for other trail efforts in the region. “For Maine and the New England states, it’s been kind of an anchor,” he said of the Eastern Trail. “We needed those first trails to be the pioneers. It’s a great ambassador.”

Much more story and pictures in this article can be read online here.