Trail development … BEHIND THE SCENES

We are Closing the Gap, heading Over the River and Blazing the Trail South

Campaign status in a nutshell 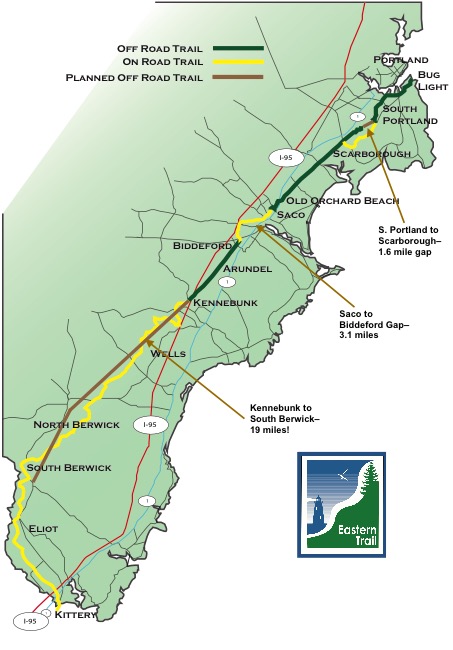 44 total off road miles when these campaigns are complete

Closing the Gap Campaign. We know many of you are wondering “Just where is the Close the Gap project? WHEN will that 1.6-mile gap between South Portland and Scarborough be closed? What’s taking so long?

This is a locally administrated project, which means the Town of Scarborough takes the lead working with MaineDOT and contractors to ensure that all mandated rules and regulations are followed correctly – a lengthy and arduous process. While they don’t have that “shovel in the ground” yet, the town has made significant progress this year. Click here for the December 2019 update from the Project Manager, Bill Reichl.

Over the River Campaign. Moving on down the trail, ETMD is working with the Cities of Saco and Biddeford seeking alternatives to the current on road route between their two segments of off road trail between Thornton Academy, Saco and Southern Maine Health Care, Biddeford.

Connecting these two sections will result in over 25 miles of uninterrupted off road trail from South Portland to Kennebunk.

The preferred route to take the trail Over the River would be to utilize the existing rail corridor and bridge over the Saco River – currently owned and operated by Pan Am. ETMD and the City Managers have reached out to Pan Am, who owns the majority of this corridor, requesting a meeting to discuss this option but have had no reply. Several local businesses and organizations have sent in letters of support. Unitil has provided us with a letter of intent to allow the trail to co-locate within the portion of this corridor they own.

While continuing to seek a response from Pan Am, the Cities and ETMD are moving forward with a request to MaineDOT for Planning Partnership Initiative Funds to cover the cost of a Route Feasibility & Alignment Study.

Blazing the Trail South Campaign. There’s been amazing progress on the 19-mile section from Kennebunk through South Berwick. Unitil, the corridor owner, has provided us with a letter of intent for an easement which would grant access for the trail to be located within their right of way. Several local businesses and organizations have sent in letters of support.

Many thanks to our two large donors, The Craig Family Trust and the Caiazzo family! Their collective $100,000 contribution helped us launch a fundraising campaign similar to the successful one for Close the Gap. To date, through their support plus donations from the Eastern Trail Annual Appeal, Pratt & Whitney, five foundations, the towns of Wells & Kennebunk, Maine DOT and several individual donors, we have raised funds to complete the existing conditions survey on 10.8 miles with $$ remaining to contribute to the next phase of the project.

As of June 2020, the municipalities, ETA & ETMD have raised over $250,000 towards funding the survey and design for this section. $70,000 of these funds covered the existing conditions survey, $180,000 remains to assist with planning and design studies.

Our request to MaineDOT in October 2019 for design funding was denied due to lack of available funds. Based on this decision, the towns and ETMD are moving forward with a request to MaineDOT for Planning Partnership Initiative Funds to cover an in-depth Planning Study on .75 miles in Kennebunk, 1.25 miles in Wells and .75 miles in North Berwick. The match for this study will come from funds already raised by ETA & ETMD and designated for this section.

As work continues behind the scenes, we are constantly reminded of the words of wisdom from our founder and mentor, John Andrews: “It takes patience, perseverance and politeness (plus $$$$) to build this trail.”

Thank you for all of yours!