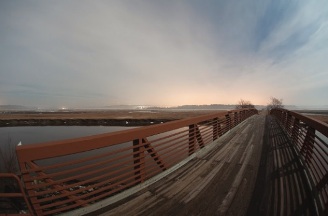 “I just go around looking at what’s beautiful, and teach people where to say ‘ooh’ and ‘ahh,’” he said.

More recently, Andrews has been leading walks along the Eastern Trail, a 65-mile section of the East Coast Greenway that connects Kittery to Casco Bay in South Portland.

Andrews, who has led the moonlight walks along the Scarborough section of the trail, said he enjoys “helping people enjoy the Eastern Trail and become aware it’s there.”

Former biology teacher Joe Yuhas is another trail enthusiast who leads moonlight treks on the trail. He meets up with fellow walkers at the parking lot behind Southern Maine Health Care in Biddeford and travels south for an approximately three-mile round trip.

The moonlight walks, during which people can also snowshoe or cross-country ski, usually run monthly, around the full moon, from fall through spring.

“You get a whole different aspect going on the hike doing it at moonlight,” said Yuhas 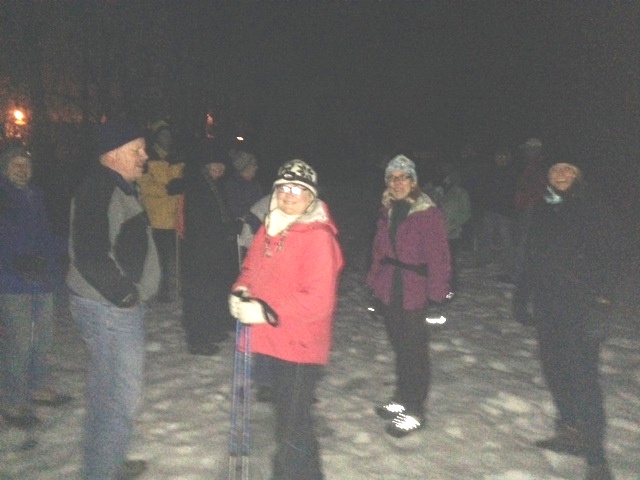 Some regulars make the monthly trip, he said, and there are usually some newcomers, too.

“I’ve had as few as one other and as many as 38” people on a trip, said Yuhas, although the average is about a dozen.

No restrictions are made on who’s allowed to come, and no registration is required, but two things are not allowed: flashlights and pets.

Pets are prohibited, he said, because “just the presence of a dog might limit animals on the trail.”

Yuhas said he doesn’t usually see animals on the trail, especially when he’s with a large group, but “we generally hear them.”

In addition to the pure enjoyment of being on the trail, both Yuhas and Andrews said they lead the moonlight treks in order to bring awareness to the trail and get more people to use it.

In these ways, they hope to get more funding to finish gaps

in the trail. The moonlight walks are along off-road sections of the Eastern Trail, but there are several gaps where
the trail runs along public roads. These gaps include a section between Scarborough and South Portland, a section
between Thornton Academy in Saco and SMHC, and most of the area from the Berwicks
south to Kittery.

A design is in the works for the Scarborough/South Portland section, said Andrews, but the current estimate for the cost, which will include building bridges in that area, is $3.5 million. It’s unclear from where that level of funding could come.

Andrews said he is also interested in getting part of the southern section of the off-road trail built.

“Those communities have been paying dues for 10 years,” he said, with nothing to show for it. “Ten years is a long time.”

There is still a long way to go before the trail is complete, but Andrews said he hopes with more people becoming aware of the trail and using it, through group moonlight trail trips or on their own, it will eventually be finished.

“It’s a major benefit to the Saco/Biddeford and Portland area,” he said.