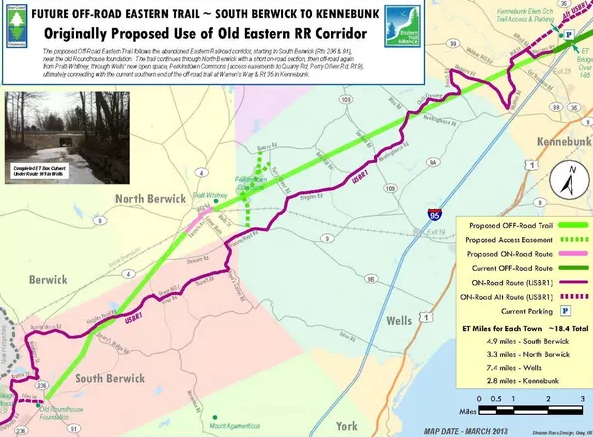 KENNEBUNK, Maine – The Eastern Trail Management District will receive $700,000 in federal funds to go toward engineering an 11-mile, off-road expansion of the Eastern Trail from Kennebunk to North Berwick.

Jon Kachmar, the executive director of the Eastern Trail Alliance, which is part of the district, said his organization is “very excited” about the funds, which Sen. Susan Collins, R-Maine, recently announced were part of the transportation appropriations bill for 2022.

The expansion will take the trail off-road, along wooded passages in view of occasional rural houses and farms, from Kennebunk Elementary School, through Wells, to the border of Pratt & Whitney, the aircraft manufacturing company at 113 Wells St. in North Berwick.

Collins, who co-authored the appropriations bill, said the trail’s expansion will provide increased opportunities for transportation and recreation throughout York County.

“The Eastern Trail is a scenic route that allows Mainers to enjoy some of our state’s most beautiful natural resources,” Collins said in a press release.

The funds are part of the omnibus package that Congress passed and President Biden signed into law last week. Kachmar said the alliance is expecting to receive its funding in two or three months.

The expansion itself will cost $7 million, according to Kachmar. The alliance will seek state and federal funding for the project and will continue to raise funds for the financial match it will be required to provide.

Kachmar said that, realistically, the project should take three or four years to complete. He added that a feasibility study should be completed next month, paving the way for a cost analysis and, “ideally,” an opportunity to put the project out to bid this summer.

The design engineering could take a year, according to Kachmar. Actual construction could take two years, he added.

Under this timeline, the trail expansion could be complete by 2025, Kachmar said.