Wildlife thrives on candid camera along the Eastern Trail 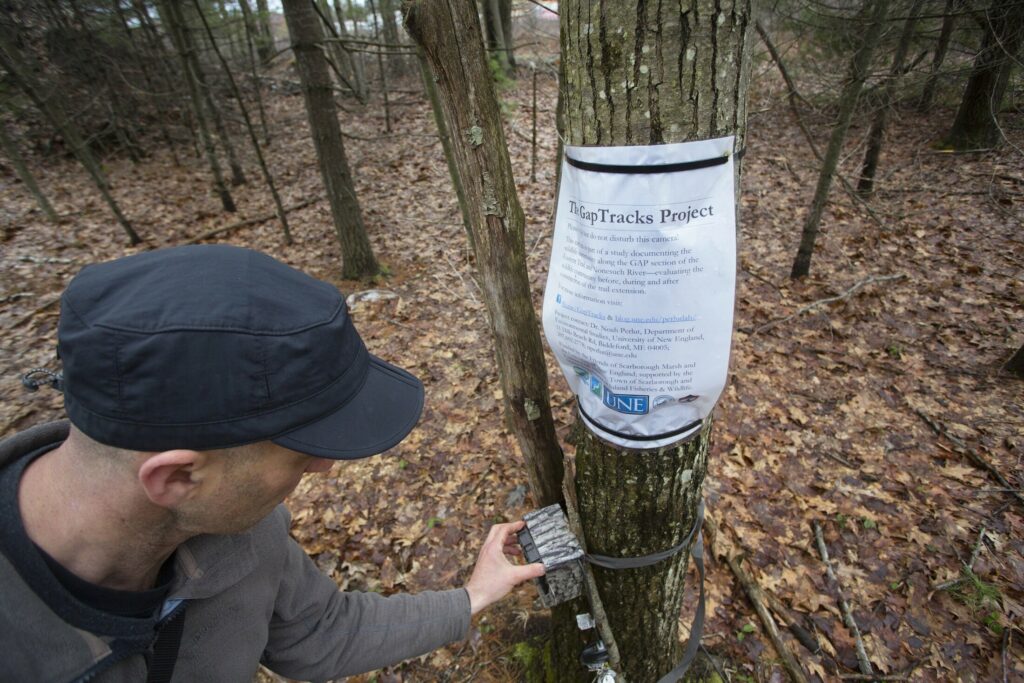 UNE professor Noah Perlut will use the data to assess the impact of a planned 1.6-mile trail extension.

SCARBOROUGH — In the spring of 2017, University of New England professor Noah Perlut downloaded the first videos from a game camera he’d hung low on a tree just off the Eastern Trail near the Nonesuch River in order to record the wildlife living nearby. Later, from his office, he looked at the images the camera captured over a two-month stretch. He was surprised at the first species he observed in the video, waddling through the woods: a pair of wood ducks foraging on the forest floor.

“I was predicting more common terrestrial species like gray squirrels or turkey,” Perlut said. “A relatively rare migratory duck searching for acorns surprised me. I do not think we have had any other wood ducks since.”

Two years and tens of thousands of images later, Perlut is ever more interested to learn what surprises await in the data that comes from his game-camera study. It’s scheduled to be completed in 2021.

The Gap Tracks Project – believed to be the first study of its kind in Maine – uses two game cameras placed around an existing section of the Eastern Trail to the south of the Nonesuch River and six cameras in the now-wild, 1.6-mile stretch of woods to the north, where the trail will be continued this fall. Perlut will continue to gather still photos and videos from the cameras after construction on the new section begins, while construction is underway, and for one year following the completion of the new section. For now, this missing section of the trail is called “the gap;” the new construction will connect the trail to the north, which winds through South Portland, with the trail to the south, which makes its way through Scarborough Marsh. Until the new section is finished, bikers and walkers must continue to get off the trail briefly and ride or walk along Black Point Road to Highland Road.

On the face of it, the Gap Tracks Project studies the effects of urban sprawl. Biologists believe that when human development encroaches on wildlife habitat, it drives wild animals into smaller, fragmented swaths of woods, fields and marshland, making it harder for wildlife to forage, mate, raise young, and generally flourish. But Perlut and other biologists aren’t certain the new section of trail will completely displace the wildlife. Perlut said it may only change the behavior of wildlife that’s already there.

Many wild animals in Maine, both diurnal and nocturnal, adapt to living around humans but often go undetected, said Maine Wildlife Biologist Brad Zitske. A frequent viewer of the Gap Tracks Project’s photos and videos, Zitske was amused at the photo of a coyote with “someone’s chicken” and a coyote carrying a groundhog almost half its size.

“This is as suburban as Maine gets, so this is a really cool opportunity to see what wildlife we have living in our backyards,” Zitske said. “There’s quite a suite of animals there. So much of the time as a regional biologist, my work is involved in nuisance wildlife. It’s nice to have photos of wildlife being wildlife.”

Zitske said he would expect to see the trail disrupt wildlife to some extent, especially since people bring dogs on the trail and dogs running off leash often harass or harm wildlife. But he said exactly how the new section of trail will affect wildlife remains to be seen.

“There could be wildlife that doesn’t care,” Zitske added. “That will be one of the interesting questions the study helps answer after the trail is completed.”

Zitske said simply informing people what animals use the marsh is useful – especially when you consider that Scarborough Marsh, the largest salt marsh in Maine, lies smack in the center of the state’s most developed area in York and Cumberland counties, home to 37 percent of the state’s 1.3 million people. According to a 2018 study by the Eastern Trail Alliance, the nonprofit that is building the Eastern Trail, more than 250,000 people used the trail last year.