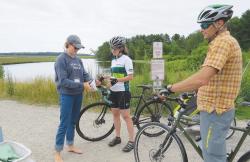 Three environmentally-focused groups are coming together to connect with strollers, bicyclists and runners on the Eastern Trail to gauge what the trail, and the Scarborough Marsh, which the trail cuts through in Scarborough, means to them and educate passersby about the value of the marsh.

This summer, through funding from Friends of Scarborough Marsh and support from the Eastern Trail Alliance, interns from Maine Audubon have staffed an information table along the Eastern Trail Fridays, Saturdays and Sundays.

Friends of Scarborough Marsh Vice President Steve Pinette, who came up with the idea, said the aim of the table is to teach trail users about the “flora, fauna and history of the marsh and the trail.”

Rowan Price, one of the Scarborough March Audubon Center interns staffing the table, said the response has been good. Many users pass by, but others stop by the table to chat, pick up a map of the trail/marsh or look at the display case or hides.

“If they don’t about (the trail) already, they become interested in it after they have walked on it,” said Price, a resident of Portland who is heading into her senior year at Dickinson College in Carlisle, Pennsylvania.

Most of the questions she fields are about the Eastern Trail, but Price, and the other interns, do field questions about the marsh and its ecosystem.

Pinette said the Scarborough Marsh Audubon Center, run by Audubon educator and Friends of Scarborough Marsh board member Linda Woodard, does a “great job” educating people, especially children, about the marsh. Pinette said he was looking for a way to reach people who may not stop by the nature center.

I thought another way to get people would be on the Eastern Trail,” he said.

Better educating the public about the marsh and its ecosystem, is a big part of what Pinette, a retired geologist is trying to do as a member of the Friends group.

“I want to make sure we are fulfilling our mission of educating the citizens of Scarborough and the adjacent area about nature and the environment as it applies to the marsh,” Pinette said. “It is a vital natural resources for many things – for recreation, vital habitat, flood control. It’s a bellwether for global climate change.”

As part of the educational effort, the Friends of Scarborough Marsh will be creating a 12-question quiz to handout to people on the trail and through their website.

At Scarborough’s SummerFest on Friday, Aug. 18, the group will raffle off prizes, including a birding tour of the marsh, binoculars and birding and natural resources books, to those who answered the questions right.

The marsh, according to the Maine Audubon website, has had a long history of use. The Sokokis Indians used the area for hunting, trapping, clamming and fishing. By the 1600s European settlers began using the marsh for harvesting hay for cattle and sheep. When haying began to decline in the 1900s, the marsh was seen as a place to fill for developments and was even proposed as the site of the town dump.

The scheduled date for the event is September 11, 2021, with online registration scheduled to begin on March 1, 2021.