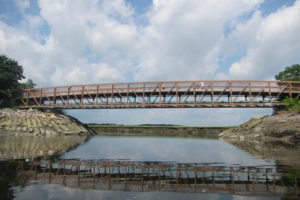 My favorite part of the Eastern Bike Trail has always been the sector that traverses Scarborough Marsh. The Sokokis Indians of the Abenaki nation who hunted and fished the wetland called it Owascoag, meaning “a place of much grass.” For years, I’ve ridden the trail enjoying the beauty and serenity of the marsh often observing kayakers and canoeists paddling a stream that meanders through the expansive bog near the Pine Point Road Trailhead. Each time, I’ve had a sense of envy wondering what I was missing.

The 3,100 acre estuary is the largest salt marsh in Maine and habitat for a variety of plants and wildlife. Owned and managed by the Maine Department of Inland Fisheries and Wildlife, birds abound and numerous species can normally be encountered.

Recently, I resolved to stop speculating and act on my curiosity by exploring the marsh from the water. Research indicated there were several boat landings that provide access but none met my needs as I wanted to launch as close to the Eastern Trail as possible so I could conveniently finish the day with a bike ride. My choice was to depart from the Audubon Nature Center on the Dunstan River just a short distance from Pine Point Road Trailhead. From that location, it’s possible to journey inland or paddle southeast towards Saco Bay where there are several opportunities to investigate tributaries that flow through the marsh into the Dunstan. 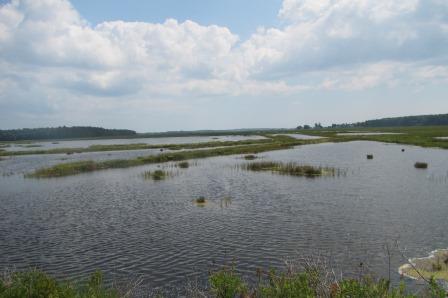 Tides are a factor to be considered when planning a trip. When I arrived for my excursion, the tide was flowing out and low tide was scheduled for an hour later. Deciding to ride the tide towards Saco Bay, I could take advantage of an incoming tide on the return trip. There are numerous ways to obtain tidal information. I rely on the website www.saltwatertides.

For my outing, I used a twelve foot Casco 120 flat water kayak. Possessing a durable plastic V-shaped hull, it is quite maneuverable yet tracks well enough to provide decent boat speed. Two roomy hatches offer sufficient dry storage for a day trip. From my viewpoint, the Casco was ideal for the intended expedition.

Shortly after commencing, I encountered the deteriorating wooden remains of what appeared to be an ancient structure. Prehistoric Sokokis Indians used weirs to trap fish in the marsh and 19th century farmers built tidal gates to prevent tides from flooding extensive areas providing more acreage for growth of what was then lucrative salt hay. Without specific knowledge, it seems logical to conclude that it was the frame of a primitive fish weir or the remnants of a tidal gate.

Rounding the next bend, I passed under the Eastern Trail Bridge from which I had often viewed boaters in the past. Looking back, I watched a succession of walkers, runners and cyclists crossing the bridge on their recreational and exercise endeavors.