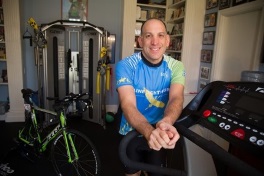 Two years ago, we were contacted by a rider who was writing a book about losing weight.  The ride had already sold out, but he wanted to be part of the event, and promised if we “snuck him in” he would mention the MLR in his book.

We didn’t see him last year, but he joined us again this year (2017). He shared the link of a New York Times article he was featured in, and as promised, wore his MLR jersey for the photo. Note this article is from 2015.

We thought you’d enjoy seeing/reading this article and meeting one of our MLR riders.

Putting the Presidential Candidates (and America) on a Diet

At the wooden kitchen table in his rambling home in the horse country of Waccabuc, N.Y., Mike Berland, a crisis manager, public-opinion researcher and veteran political pollster, assessed the so-far lackluster campaign performance of Jeb Bush, the Republican presidential candidate.

Mr. Berland, who has worked for the campaigns of Hillary Clinton, Bill Clinton and Michael R. Bloomberg, is certain he has identified Mr. Bush’s key problem: He is not eating enough fat.

The scheduled date for the event is September 11, 2021, with online registration scheduled to begin on March 1, 2021.