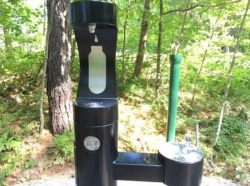 Walkers, bicyclists and runners using the Eastern Trail in Saco have one more reason to get out and enjoy the trail: a new water fountain and water bottle fill-up station has been installed on the trail just off Mill Brook Road.

The new water station, a first along the twenty miles of Eastern Trail that runs from Bug Light Park in South Portland to Rte. 35 in Kennebunk, is the result of local trail users asking, “could a water fountain be installed on the trail? It’s hot out out there and we’re thirsty!” Eastern Trail Alliance trustee Bob Lanigra, a former Saco resident who now lives in Scarborough, met several people along the trail who mentioned how welcome a source of water would be, particularly in warm weather.

Lanigra first looked into a possible fountain location off Pine Point Road, near the Scarborough Marsh. Water service was not available off the exiting parking lot that services trail users. His search for a suitable location headed south, to a section of trail that is owned by the Maine Water Company.

“Maine Water was very open to working with us when they heard about the water fountain idea,” said Lanigra, a long-time runner and cyclist who participated in his 24th Trek Across Maine in June. “They own the property where Mill Brook Road narrows to an entrance to the trail, and were willing to do the installation if we bought the fountain.”

Lanigra swung into action. He contacted Maine Molecular Quality Controls, Inc., which recently completed a new building in the City’s Mill Brook Business Park. Joan Gordon, president of MMQCI, is a fan of the Eastern Trail, and in fact chose the Mill Brook location due to its proximity to the trail. Ms. Gordon confirmed her support for the fountain by offering to pay half the cost of the new unit.

Who would pay for the other half of the new fountain? Lanigra, who retired from a career in sales, next approached the Chiropractic Family Wellness Center in Scarborough, whom he is familiar with through his interest in running. They were willing to help with the project by contributing the remainder of the cost.

Maine Water Company then needed a base for the fountain to be installed on. They reached out to a vendor, American Concrete Industries, Inc., of Auburn, which was willing to donate a concrete base. With that, the fountain was ordered, and in a few weeks time, a Maine Water crew installed the base, made the connection to an existing water main, and the fountain was dropped into place.

“I was by the fountain last week, and while I was there two people stopped and drank and filled their water bottles,” said Carole Brush, executive director of the Eastern Trail Alliance. “They said they really appreciated having the fountain available.”

Thank you to all who made Saco’s newest “hydration station” a reality. Let’s put that fountain to good use!