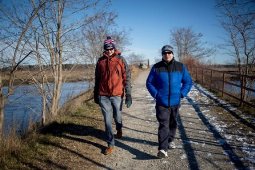 The ambitious Eastern Trail project will add another key component next year, as work begins on a 1.6 mile section to connect South Portland and Scarborough.

SCARBOROUGH — While the first frigid gusts of winter swept across the Scarborough Marsh last week, Janice Cohen had warmer thoughts as she walked her black Labrador, Abe, along the Eastern Trail. When Cohen learned the trail would be extended, she stopped to envision the impact.

“I believe in community. Walking on the same trail every day, you get to know the people who use it. People have a safe place to walk. It connects people. Roads don’t connect people, but trails do.”

This time next year, work will begin on the 1.6-mile section of the Eastern Trail that will connect South Portland to Scarborough, linking four towns along a 16-mile off-road path that runs along the coast in the most developed part of Maine. And users of the trail are delighted about the plans to close the gap over the Nonesuch River.