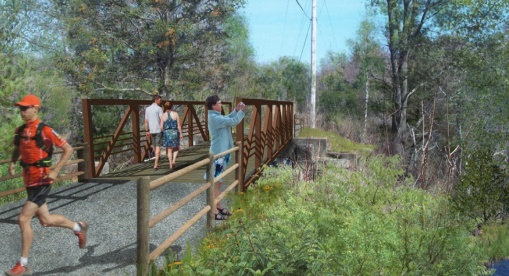 The money will be used to build two bridges in Scarborough that will complete 16 miles of off-road trail from downtown Saco to Bug Light Park in South Portland.

The Eastern Trail Alliance has reached its $4.1 million fundraising goal for the “Close the Gap” campaign to build two bridges in Scarborough that will complete 16 miles of uninterrupted, off-road trail from downtown Saco to Bug Light Park in South Portland.

It was the largest fundraiser in the alliance’s 18-year history, topped off with an additional $500,000 pledge last week from the Maine Department of Transportation, the alliance announced Friday.

In 2015, the MDOT committed $1.55 million to the project and asked Scarborough, South Portland and the alliance to raise the remaining funds. With help from the Bicycle Coalition of Maine, the campaign raised nearly $2 million from various donors, including and Portland Area Comprehensive Transportation System, which pledged over $1.1 million.

“We are like the little engine that could,” said Carole Brush, executive director of the alliance. “We believe in what we are doing and clearly so do our partners.”

The “Close the Gap” funds will be used to build two bridges – one over the Nonesuch River near Eastern Road and the other over the Pan Am Railways tracks near Pleasant Hill Road – that will complete a 1.6-mile section of the off-road recreational trail as it passes through Scarborough. Pending regulatory approvals, construction is expected to begin next summer.

“This trail project is a successful example of how collaboration between a public and private partnership should work,” said MDOT Commissioner David Bernhardt. “It enables us to stretch our dollars further and gives momentum to grassroots fundraising projects.”