Two major organizations in Maine, the Bicycle Coalition of Maine, and the Biddeford/Saco Chamber of Commerce, bestowed honors in January 2012 on John Andrews, the founder and President Emeritus of the Eastern Trail Alliance.

The Bicycle Coalition of Maine honored John Andrews with one of their annual awards for “individuals for their work to improve bicycling in Maine.” The Biddeford/Saco Chamber of Commerce honored John with the William Kany Leadership Award.

From the 1/19/2012 Bicycle Coalition of Maine announcement:

“Andrews, a retired engineer, served as founding president of the Eastern Trail Alliance until last summer.  For 15 years, he led the effort to create a multi-use trail from Kittery to South Portland.  Along the way, he secured funding, convinced municipalities to work together, won support from politicians and overcame many other obstacles.  The trail now extends for nearly 21 miles in southern Maine.

Andrews “met an enormously wide array of people with all sorts of connections to his Eastern Trail dreams – directors of corporations, everyday common citizens, Mainers, people from away,” said Jim Bucar, an Alliance trustee.  “He stores all their names and histories and details in his voluminous memory, ready to extract them when it would benefit the trail to reach out to them.” “ 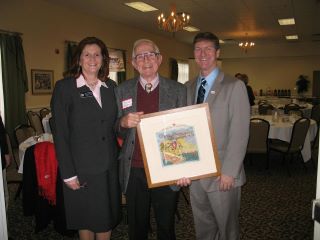 The Biddeford/Saco Chamber of Commerce honored John on January 24 with the William Kany Leadership Award.  The award came with an original work of art commisioned specifically to honor the recipient. In this case, the art represents the new Route 1 footbridge and part of the trail. We’re so proud of you, John!