Why Native Americans Named the Moons 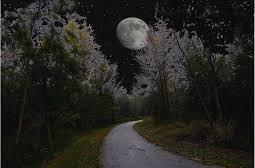 The early Native Americans did not record time by using the months of the Julian or Gregorian calendar. Many tribes kept track of time by observing the seasons and lunar months, although there was much variability. For some tribes, the year contained 4 seasons and started at a certain season, such as spring or fall. Others counted 5 seasons to a year. Some tribes defined a year as 12 Moons, while others assigned it 13. Certain tribes that used the lunar calendar added an extra Moon every few years, to keep it in sync with the seasons.

Each tribe that did name the full Moons (and/or lunar months) had its own naming preferences. Some would use 12 names for the year while others might use 5, 6, or 7; also, certain names might change the next year. A full Moon name used by one tribe might differ from one used by another tribe for the same time period, or be the same name but represent a different time period. The name itself was often a description relating to a particular activity/event that usually occurred during that time in their location.

Colonial Americans adopted some of the Native American full Moon names and applied them to their own calendar system (primarily Julian, and later, Gregorian). Since the Gregorian calendar is the system that many in North America use today, that is how we have presented the list of Moon names, as a frame of reference. The Native American names have been listed by the month in the Gregorian calendar to which they are most closely associated.

The Full Moon Names we use in the Almanac come from the Algonquin tribes who lived in regions from New England to Lake Superior. They are the names the Colonial Americans adapted most. Note that each full Moon name was applied to the entire lunar month in which it occurred.
Link on the names below for your monthly Full Moon Guide!

Note: The Harvest Moon is the full Moon that occurs closest to the autumnal equinox. It can occur in either September or October. At this time, crops such as corn, pumpkins, squash, and wild rice are ready for gathering.

From the OLD FARMER’S ALMANAC