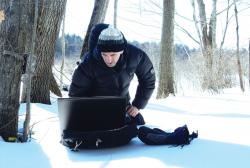 BIDDEFORD/SACO – When University of New England professor Noah Perlut first heard about upcoming construction happening on the Eastern Trail, he knew he wanted to conduct some kind of study on it, and he has finally found the right time to do so.

“I’ve always kept my eye on this (construction process), and I’ve always wanted to do a wildlife project on the Eastern Trail,” he said. “I’ve built this in my mind over time and thought, OK, now’s the time.”

Perlut’s project has been launched in anticipation of construction on the trail, which is scheduled to begin sometime in 2018. The construction project is called “Close the Gap” – hence Perlut’s project title, “GapTracks,” – that aims to finalize a 1.6 mile gap of the 65- mile portion of the Eastern Trail in Scarborough, where there are few formal trails, according to materials provided by the Eastern Trail Alliance. The gap interrupts travel between South Portland and Saco, and the project involves construction of two bridges, totaling $3.8 million. At least $3.2 million has already been raised, with Maine Department of Transportation committing $1.55 million, with $550,000 left to raise.

Perlut’s study, now under way, involves eight mounted Bushnell cameras that can endure extreme conditions, one man and about 40 undergrad students, all backed by the support of various local entities. The cameras cost $2,000, Perlut said, and the only other expense will be Perlut’s time, paid for by UNE. He received funding for the cameras from Friends of Scarborough Marsh, a nonprofit organization, and received support from the Eastern Trail Alliance, the town of Scarborough and Maine Department of Inland Fisheries & Wildlife.

Perlut, 42, is in the environmental studies and science department at UNE. He has a doctorate in wildlife biology from the University of Vermont, where he taught wildlife classes before moving to Maine eight years ago. A fulltime and tenured professor, Perlut continues to teach wildlife classes at UNE and classes on conservation biology and environmental issues. He’s also an ornithologist, which means he studies birds, and has been published in conservation, biology, ornithology, wildlife and college journals.

Perlut mounted the eight cameras on the bottoms of trees within a one-mile radius of Scarborough Marsh on Feb. 26 to detect terrestrial, or ground, animals. The cameras run 24 hours a day, using infrared technology at night, to capture behavior and wildlife activity in that area. The purpose is to collect data from the cameras over a three-year period – with construction ending before the third year – and have students at UNE analyze the data, write it up and present what they learn to Scarborough High School students. He also plans to publish results in scientific literature, which he said students will also help with. He’ll visit the cameras once every month or two to retrieve data.

<!– The rest of the article in case the online version goes away

Cameras monitor the area that will be under construction.

The last time the trail saw new additions was in 2012, when 14 mile markers were installed on more than three miles of trail, extending from the Arundel northern boundary to Route 35 in Kennebunk, according to the Eastern Trail Alliance website. Since then, crossing improvements have been made with marked crosswalks and flashing warning lights on Black Point and Pine Point roads. In addition, Memorial Bridge opened in August 2013, which is considered a critical link for those who enter the trail at its southernmost point in Kittery. It connects Portsmouth, New Hampshire to Kittery.

“Right now what we’re doing is kind of a pre-phase,” he said. “We’re looking at wildlife and human use before construction. We’re going to keep this up during construction, then continue the cameras to run post-construction for an equal amount of time as preconstruction.”

“How does the human use affect wildlife use? We can look at (wildlife and human use) in tandem. That’s sort of the main point of this,” he said.

The project has three components, he said. One is to foster appreciation and knowledge of the Eastern Trail – a wildlife resource, he said. The trail is used by a multitude of creatures including foxes, raccoons and coyotes.

Another component is education related. Perlut plans to integrate the study in his terrestrial wildlife course, which he teaches every other spring at UNE. The course typically involves teaching students how to track animals in snow and encouraging them to think of how animals survive during Maine winters. The study will be integrated in the next semester of this course by collecting data and having students use it for the length of the semester. Students will score photos to determine the best ones, evaluate what animals were present and ask different kinds of questions about wildlife and human use of the trail. He will also integrate findings at Scarborough High School. The next time he teaches the class will be when GapTracks ends, so students will be able to use and analyze data across its three-year span, write it for publication and present it to Scarborough students.

“My whole research lab explores how animals – primarily birds – adapt to human habitat modification,” he said. “This (part of the Eastern Trail) is changing wildlife habitats, in some ways for the better. We created a trail right here and some wildlife could (navigate) easier because they don’t have to trudge through the snow. Others might be scared of it, because of the dog pee. So there could be positive and negative effects.”

The third component of the study is the science of it, which is to understand how the trails that comprise the Eastern Trail – as well as the human use of these trails – affect wildlife communities and their adaptations to it.