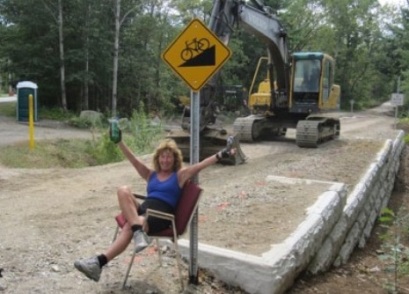 [Ed. Note. One of the three women this article features is our own Carole Brush, the Executive Director of the Eastern Trail Management District. Carole’s story appears last in the article]

Kristine Keeney, Carrie Kinne, and Carole Brush are three Maine women who find themselves in an unexpected position that presents great opportunity and enormous challenges, thanks to the COVID-19 pandemic.

The three women manage three of Maine’s most popular trail networks from northern Maine to York County. The trails are being used by record numbers of people who crave outdoor recreation as an escape from the daily stress and anxiety generated by the coronavirus. But those record numbers also present difficult challenges to ensure everyone’s safety in the new normal of social distancing.

Kristine never thought she would ever see a situation like the one that has unfolded across the state. She serves as the New England coordinator of the East Coast Greenway Alliance. The 32-year-old lives in Greenwood near Bethel in the Western Maine mountains and is looking forward to marrying her fiancé, Jake. She originally hails from the New Haven, Connecticut, area, but Maine has always held a special place in her heart.

“I started coming to Maine in 2008 or so. It was actually for skiing in a ski club at Sunday River,” Kristine recalls. When she attended graduate school in 2013, she was living in Portland and commuting to Boston via the Downeaster. Her goal was to become the city’s bicycle coordinator.

She worked in that role for a few years and increased the bicycle network by creating more bicycle parking at a time when bicyclists wanted to have more freedom to share the road with motor vehicle traffic. “I was always into bicycle/pedestrian infrastructure.” She later accepted a planner position in Vermont for three towns near the Sugarbush Ski Resort area. She worked on a lot of trail projects in the Green Mountain State, mapped out trails for the whole region, and created user-friendly map kiosks. In July 2018, Kristine moved back to Maine when her present job was available.

In her role, Kristine works with smaller Maine trail groups like the Kennebec Estuary in Bath and the Eastern Trail Alliance in Saco that have direct management over their specific trail systems. Kristine helps them work with regional planners, local governments, and utility companies to design trails, maintain existing trail standards, and add new trails. Kristine spends a great deal of time advocating for trail funding in Augusta and keeps her trail part ners updated on important rule changes such as the COVID-19 guidelines issued by Gov. Janet Mills and
the Maine Centers for Disease Control.

Kristine is an avid biker herself. “I fell in love with it because of the flexibility and convenience, as well as the health benefits.” Biking can also help people enjoy a physical, outdoor activity while maintaining proper social distancing from others. “Biking is a great option to distance yourself from other people as well as having a great outlet for physical and mental health.”

She sees this new attention paid to biking as one of the strange benefits wrought by the current pandemic. After years of advocating for increased funding for trail networks throughout Maine and New England and spreading awareness about the health and environmental benefits of increased bicycle transportation, Kristine is seeing more people gravitate toward these causes. For example, trail use has tripled on Portland’s popular Back Cove Trail from March 2019 to March 2020, from 325 users per day to more than 1,000 daily users because of COVID-19, and that number will more than likely continue to climb as summer approaches.

As this trend unfolded, Kristine and other trail network managers were scrambling to educate trail users about the importance of social distancing. They want people to be mindful of the parking lots, for instance. If the lots are full, come back another day to use the trail, or pick a day when the weather is not as perfect, when fewer people will venture out.

“It’s a type of moving target when it comes to best practices,” Kristine said.

Maine trails are getting overwhelmed because, Kristine explains, there are more people from other communities who are traveling to different cities and towns to access those trails. Some communities have closed trail parking lots to traffic to limit access to hikers and bicyclists. When the state closed beaches and state coastal parks, that put more pressure on the existing trail network.

“It’s a situation that honestly none of us thought we would find ourselves in,” she said.

For Carrie Kinne, the executive director of the Kennebec Estuary, she and her volunteers already have their hands full striking the right balance between increased trail use and public health concerns. The Yarmouth resident oversees 30 miles of trails that include 12 preserves and 28 easements, including the latest one in Richmond.

Her trail network extends from Richmond down to West Bath and Dresden down to Georgetown. She said her group just celebrated its 30th anniversary. They have come a long way from the days when its founders were sitting around kitchen tables and first discussed protecting vast tracts of land to protect natural habitat and allow public enjoyment.

Carrie completely understands why so many people who may have never enjoyed the Kennebec Estuary’s trails are using them now. “There are things you think of when you think of Maine, like nature, the environment, and the landscape. If you are from Maine, you may take it for granted.”

Carrie is hopeful the trail scout program they started when COVID-19 really took off in Maine will pay dividends. The program allows people to share their observation about the trails. “It’s getting a lot of traction.” Trail scouts also report the activity they are seeing on the trail, as well as trail conditions, to serve as the estuary organization’s eyes. As a result, more people in the community feel vested and engaged in the Kennebec Estuary’s work.

Carrie said the estuary’s corps of volunteers will make sure the trails are nice and wide to accommodate the growing number of users they will see this summer. “There are going to be
busy times, but ultimately you try to get the message out there as best you can,” Carrie said. “There should be ample space for everybody out there.”

Carrie has also been vested in Maine’s environment and its position as a leader in preserving public lands. She is originally from Farmingdale and spent a great deal of her career in the healthcare industry before she joined the Kennebec Estuary. “Out of all the non-profit work that I’ve done, this is incredibly rewarding.”

Carrie has been married to Jack for 20 years and the couple have four stepchildren and seven grandchildren, all under age nine. The kids love exploring the trails as much as Carrie does.

Meanwhile, the situation in southern Maine could be more complex for Carole Brush. As the executive director of the Eastern Trail Management District in Saco since 2007, Carole has already seen trails like Scarborough Marsh get overwhelmed with users to the point where social distancing was impossible. Carole said a survey showed the number of Scarborough Marsh trail users increased from 4,000 in April 2019 to 12,000 this April. In May 2019, they saw 7,000 people use the same trail compared to a projected 21,000 people this May.

“Maybe the big benefit of all this is that people are getting out more and exercising more and are really taking advantage of what we have,” Carole believes. “The use of the trail has tripled from what it was a year ago.” In some ways, it’s a nice problem to have for trail advocates who are always looking for ways to extoll the trail network’s benefits. But like her colleagues Kristine and Carrie, Carole could never have foreseen a situation like this unfolding in 2020.

She has been with the Eastern Trail Management District (EMTD) since 2007. She wanted to live in Maine to be close to her family and become an Audubon Society registered guide for the Scarborough Marsh. Since her earliest years growing up in New Jersey, Carole has had a love affair with nature.

“From the time I was a child, going out to nature was always my go-to place,” she said. “Maybe the big benefit of all this is that people are getting out more and exercising more and are really taking advantage of what we have.” Carole studied land conservation when she attended Ramapo College in New Jersey and ended up splitting her time between Boulder, Colorado, and New York State for the next 10 years. “It was a pretty tough commute, but it was worth it.”

In New York, Carole led hikes and taught fitness classes at the Mohawk Preserve and the Mohawk Mountain House in the Hudson Valley region. Carole has five grandchildren and has been single for quite a while. “My work is a big part of my passion, to be out there on the trails and keep conserving land for trails.”

Carole said her volunteers will continue to post signage and utilize social media to spread the word about the importance of social distancing so everyone can enjoy the trails. They will also have trail ambassadors to guide people to stay six feet apart. More importantly, the public’s willingness to comply with the new normal will ensure the trails remain open.

Even as the COVID-19 pandemic dominates their attention, Carole said the ETMD is still working on three projects to expand and improve the existing trail network. One involves creating a 1.6-mile link between South Portland and Scarborough. The other two projects involve a three-mile stretch to connect Thornton Academy in Saco to Southern Maine Medical Center in Biddeford and an 18-mile stretch from Kennebunk near Alewives Road south all the way to South Berwick. The work to maintain and expand existing trail networks and to educate the public about how best they can enjoy them now is an ongoing process.

“It takes a village or several to build a trail,” Carole observes. It may also take several villages to keep the trails safe and accessible this summer and beyond.

The event will be held September 11, 2021 – online registration is live now.  Registration will close when we reach 800 riders, and we are getting close!