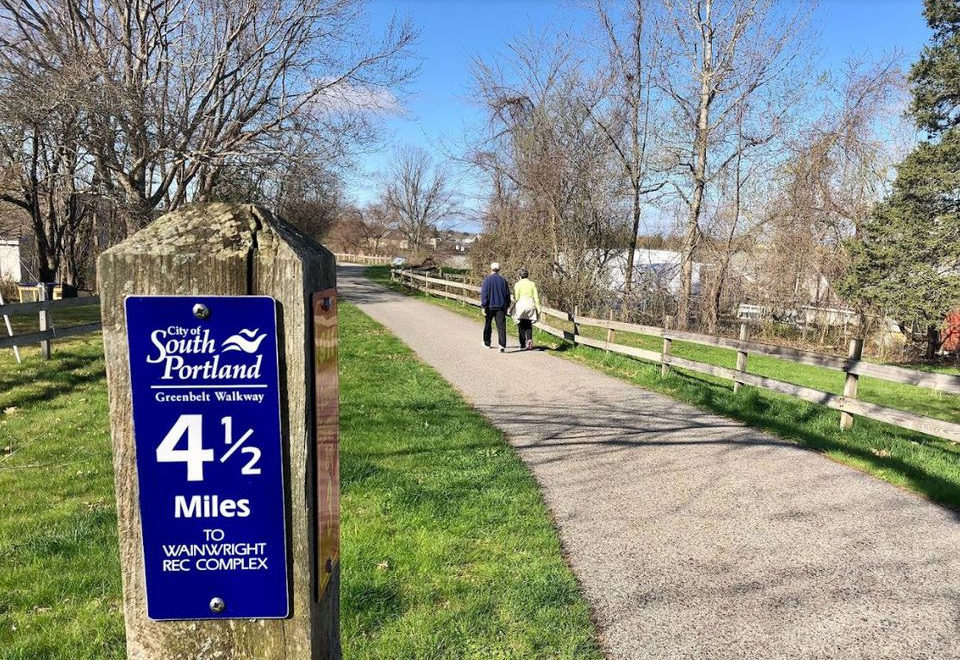 It’s one of 36 Hall of Fame Trails across the country, and one of only four in New England.

An hour ago, we were battling the crazy traffic on Route 1 and the crowds in Kennebunkport, Maine. And now? Now we’re paused on the Eastern Trail overlooking beautiful Scarborough Marsh. It’s low tide, and we watch as egrets feed in the narrow channels that snake through the expansive salt marsh, and shorebirds gather in shallow pools. It’s quiet, peaceful, and worlds away from the bustle.

Such is the beauty of Maine’s Eastern Trail, a 65-mile Rails-to-Trails on- and off-road route in southern Maine, running from South Portland to Kittery. Recently, the Rails-to-Trails Conservancy inducted the Eastern Trail into its Rail-Trail Hall of Fame, recognizing its scenic, historic, and community value. It’s one of 36 Hall of Fame Trails across the country, and one of only four in New England. The other New England Hall of Famers are the Island Line Rail Trail in Vermont, the East Bay Bicycle Path in Rhode Island, and the Minuteman Commuter Bikeway in Massachusetts.

“The Eastern Trail is one of the premier recreational assets in the region and provides a valuable alternative for those seeking more active recreation,” says Paul Schumacher, executive director of the Southern Maine Planning and Development Commission.

The Eastern Trail, following portions of the rail route built by the Eastern Railroad in the 1840s to connect Boston to Portland, is also part of two multistate trail systems: the developing 3,000-mile East Coast Greenway, connecting trails along the Eastern seaboard from Maine to Florida, and the New England Rail-Trail Network, linking Maine, Vermont, New Hampshire, Massachusetts, Rhode Island, and Connecticut.

“We call it the great connector,” says Claire Polfus with Maine Trail Finder. “It connects neighborhoods, communities, and trail systems.”

And interest in the trail has skyrocketed. “Since the pandemic began, the Eastern Trail page on Maine Trail Finder has surged into the top 10 most viewed on the site, an indicator of how important close-to-home trails have become,” Polfus says.

“The Eastern Trail is quintessential Maine, and one of the most beautiful sections of the entire 3,000-mile East Coast Greenway,” says Kristine Keeney, Northern New England manager with the East Coast Greenway Alliance. “The combination of the beautiful salt marsh, birds, and the smell of the saltwater is special.”

The 24-mile northern section from Kennebunk to South Portland is the most popular portion of the trail because most of it is off-road; it drew nearly 250,000 bike and pedestrian users in 2021. The 41-mile southern portion is on public roads with trail signs directing the way.

We like to start in Kennebunk, biking the trail south to north. First up is a section through pretty Arundel, passing farms and open fields. “It’s my favorite part of the trail,” says Schumacher. “This rural setting is getting increasingly hard to find along the southern coast of Maine.”

It’s a great beginning, a quiet stretch of woodsy path before heading into Biddeford. In Biddeford, the trail goes on road, with a few off-road sections. Though we’ve only been riding a short while, we’ll often pedal into downtown Biddeford to grab doughnuts or butter cookies from Reilly’s Bakery. Properly fueled, we’ll pedal out to Scarborough Marsh, one of the most scenic spots on the Eastern Trail. This off-road section overlooks the 3,000-acre protected estuary, the largest in Maine. This is a great place to linger, watching for shorebirds, and taking in the views. “The Scarborough Marsh is just one of the most beautiful places I’ve ever been on a bike,” says Keeney.

Unfortunately, it’s back on the road from Scarborough into South Portland. But work is currently underway to remedy this; the Close the Gap project would fill in a 1.6-mile section with off-road trail that would connect Scarborough with South Portland. It’s one of several campaigns to improve the Eastern Trail, others include the Over the River campaign, focusing on 3 miles through downtown Biddeford and Saco; the Blaze the Trail South campaign concentrating on the 17 miles of current on-road trail between Kennebunk and South Berwick, and the Berwicks to the Border campaign, focusing on the 11-mile section from South Berwick to the New Hampshire border.

For now, we’re content to pedal Highland Avenue into South Portland, where the trail goes off-road again near the Wainwright Athletic Complex. We love the water views, crossing over Fore River, with views of Casco Bay Bridge. The northern terminus of Eastern Trail ends at a beautiful, 8.78-acre waterfront park, a popular picnic and kite-flying spot. It’s also home to Bug Light, an 1875 lighthouse nicknamed for its small size. We’ve biked about 30 miles at this point and in our best-case scenarios, we’ve coaxed friends to come pick us up with the promise of burgers and beers in Portland.