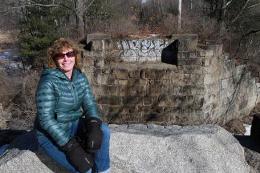 SCARBOROUGH — The Eastern Trail Alliance reached a $4.1 million fundraising goal to complete a nearly 2-mile section of trail, including building a bridge to traverse the Nonesuch River.

The campaign, called “Close the Gap,” was to build bridges over the Nonesuch River and the Pan Am Railways tracks near Pleasant Hill Road. Pending regulatory approvals, construction is expected to begin this summer.

Completing the 1.6-mile portion of the trail will link four communities and enable access to 16 miles of uninterrupted, off-road trail between South Portland’s Bug Light and downtown Saco.

The Maine Department of Transportation contributed an additional $500,000 to the project in December, officially putting it at goal.

“This is a win-win for all,” MDOT Commissioner David Bernhardt said in a press release. In 2015, MDOT committed $1.55 million and asked that Scarborough, South Portland and the ETA raise the remaining funds to complete the project.

“This trail project is a successful example of how collaboration between a public and private partnership should work,” Bernhardt said. “It enables us to stretch our dollars further and gives momentum to grassroots fundraising projects.”

“Our members have repeatedly voted in favor of this trail project because we see that the benefits will be multi-faceted from transportation, recreation and economic development perspectives,” Duncan said.

The next project for the group will be adding a section of trail from the Kennebunks through Wells and the Berwicks that will eventually go to Kittery.

The Eastern Trail is part of the East Coast Greenway that, when completed, would stretch approximately 2,900 miles from Calais to Key West, Florida. In southern Maine the trail is about 65 miles long, stretching from South Portland to Kittery; Brush on Wednesday said about a third of the Maine trail system is complete.

She estimated that 100,000 people used the trail last summer, after a counter and surveys were used to track activity on a designated 16 miles. The counter will remain on the trail until May, providing about nine months of data.

Parts of the trail are equestrian friendly and are also accessible to people with disabilities, Brush said.

The Eastern Trail is built along the old Eastern Railroad corridor. The railroad connected Boston to Portland and operated from 1842-1945. In 1998, a group of volunteers pitched the idea to create the trail along the rail corridor between the Scarborough Marsh and Bug Light in South Portland.