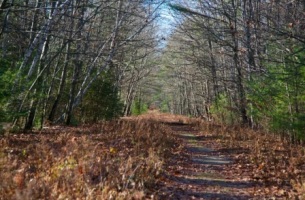 YORK COUNTY —Bikers and hikers of York County may have a new trail to traverse in another year, as actions to extend the Eastern Trail in York County have picked up momentum.

Wells and Kennebunk have been working conjointly to extend the Eastern Trail — 65 miles of recreational trail extending from South Portland to Kittery— from its cutoff point in Kennebunk, near Alewife Road, to its cut off near Pratt and Whitney in Wells; a total length of about 8.5 miles where the trail contains a gap.

The towns applied for a split grant with the Department of Transportation last year to hire a consultant to conduct land surveys of the trails proposed path. Both towns are awaiting final plans, but according to Wells Town Planner Mike Livingston, constructing the extension should prove to be a smooth process.

“In Wells and portions of Kennebunk, the trail’s going to be located on an existing old railroad bed that’s been abandoned for 100 years,” Livingston said. “Other than a few brook crossings and a few road intersections that will require some construction our route is going to be less expensive than what’s been expended in the past.”

According to the Eastern Trail website, the rail line operated as a mode of transport from Portland to Boston from 1842 to 1945 and was known as the Eastern Railroad Corridor. The line ran through Scarborough, South Portland, Saco and parts of southern York County, including North Berwick.

In 1965, after the railways’ services had ended, Portland Gas Light purchased most of the abandoned right-of-way and constructed a below ground natural gas line that is still in use today. Unitil, a public utilities company from New Hampshire, bought the line in 2008.

The current plan is that the extension trail will follow the railway on the opposite side of the entrenched gas line, Livingston said, adding that the towns have met with Unitil representatives on multiple occasions to ensure the trails path along the right-of-way.

“We just need to make sure we don’t effect the gas line,” Livingston said.

Additionally, the towns have applied for another grant with the DOT for land that still requires surveying for the proposed trail extension in both Wells and Kennebunk. Afterwards, the construction of the trail will be much clearer says Livingston.