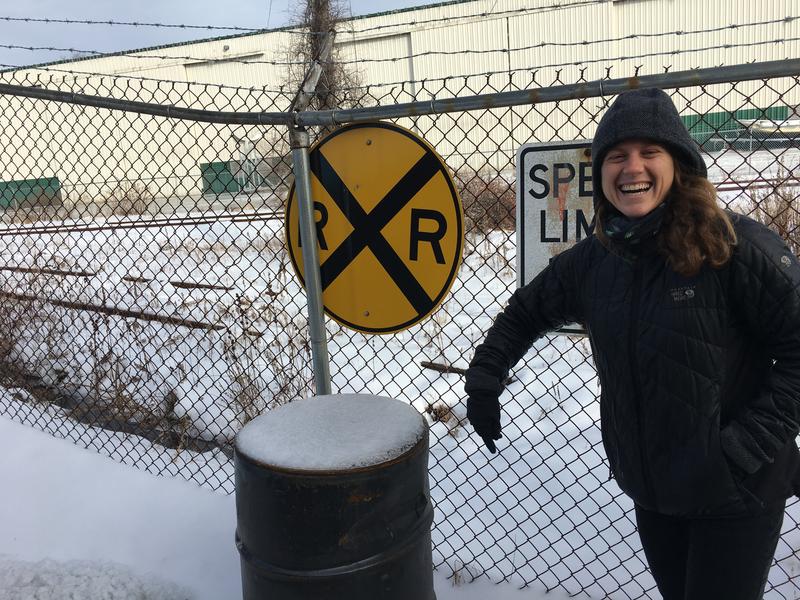 [Ed. note: The Eastern Trail gets a nice plug about one-third into the article]

A proposal to create a new bike path along an existing rail line between Portland and Yarmouth is drawing strong interest from the communities it would pass through. It’s also raising worries that it would interfere with a plan to extend passenger train service from Portland to the Lewiston-Auburn area.

The rail line in question starts at the edge of Casco Bay, next to an imposing brick factory building.

“Right now we’re actually behind the B&M baked beans facility looking at what would be the southern terminus of this,” says Molly Henry, regional coordinator for the East Coast Greenway Alliance, the group that has been working for more than 25 years to realize the dream of a contiguous, protected walking and bike path from Maine’s border with Canada to Key West.

Henry says the path is about 30 percent done.

“Our longest continuous stretch of East Coast Greenway actually is in Maine, and it’s the 87-mile Downeast Sunrise Trail, which stretches from Ayers Junction just south of Calais and all the way into Ellsworth,” she says.

The group now has its eye on this stretch of rail corridor, which runs seven miles from the bean plant along Interstate 295 through Falmouth and Cumberland to a junction in Yarmouth. The state Department of Transportation owns it, and the St. Lawrence and Atlantic Railroad has a renewable lease for use of the line, although it actually dropped service to the bean plant two years ago.

The corridor’s course parallels an on-road route popular with cyclists of all types, from squadrons of neon-spandexed racers and family outers to lone commuters, such as Ted Reed.

“I’m an executive at Unum. I ride about 4,000 or 5,000 miles a year from the middle of Cumberland Range Road area, every day, till about last week, and I pick it up again around March,” he says.

Reed was one of about 60 people who turned out for a recent presentation on the proposal in Falmouth. And he was one of many applauding the idea of a dedicated bike route into Portland.

“I am terrified in a few places on my commute. I cannot use Route 9 in Cumberland. It’s dangerous — it’s deadly dangerous,” he says. “This would be really, really welcome to people like me. Now, there are not many people like me, but there might be more if you put one of these things in.”

Bike and walking path boosters point to southern Maine’s Eastern Trail, stretching 65 miles from Portland’s Bug Light to Kittery — with 22 miles of it off-road — as a prime example of how they can contribute to local economies, creating new community gathering places, tourism assets and even boosting nearby real estate values.

But there’s opposition, too. Cumberland resident Paul Weiss reeled off a list of rail corridors whose potential he says has been degraded by their conversion into bike paths.

“The Mountain Division, the Sunrise Trail, the Augusta-Gardiner branch, the Union branch, the Maine Eastern Railroad. Those are all railroads that have been ripped up and destroyed or damaged by putting in these trails. And it costs a huge amount of money to ever rebuild by doing this,” he says.

Read (or listen to) the entire article online here.